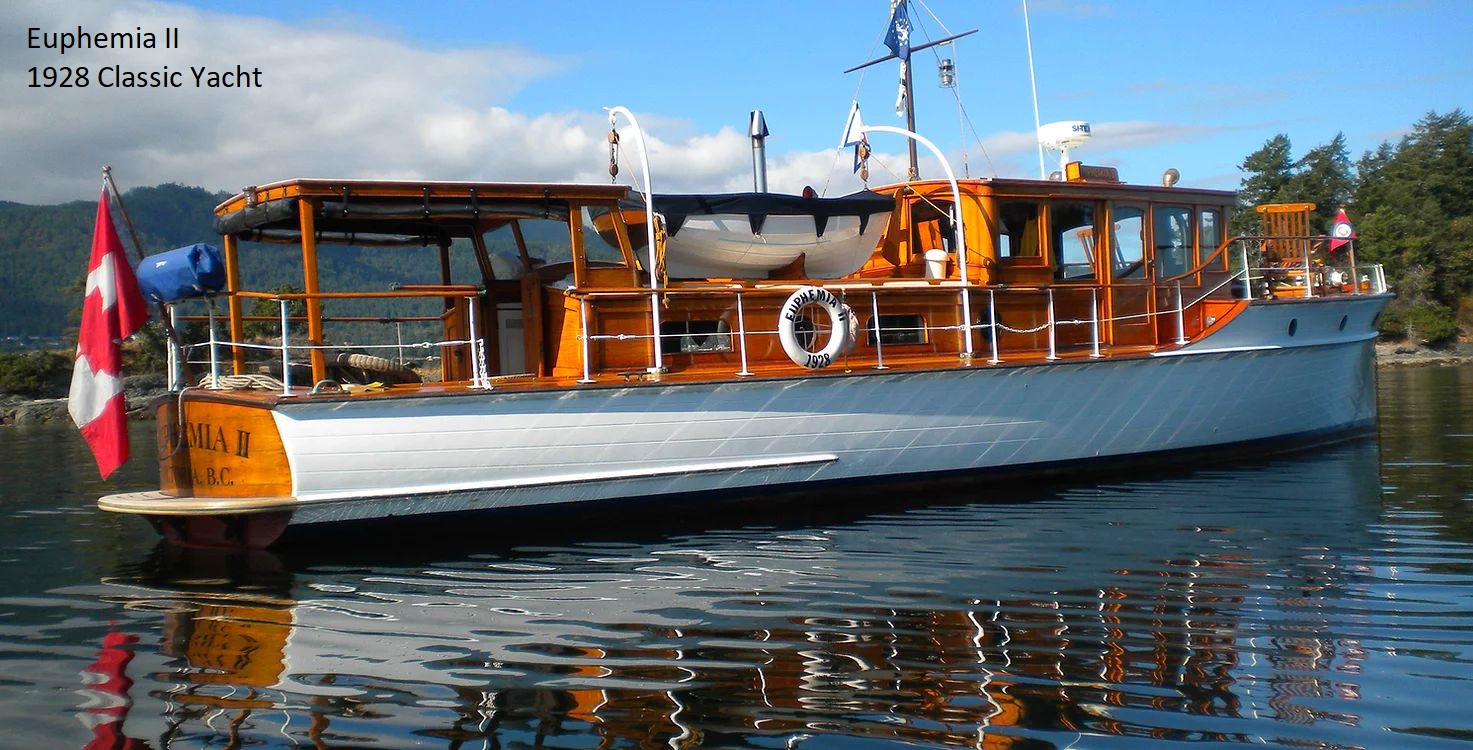 Seidelhuber named the vessel Mary-Mar-Ann after his wife and two daughters. He was particularly interested in predicted log racing and undertook the most challenging race, the Capital to Capital race from Olympia WA to Juneau AK in 1929.  Mary-Mar-Ann won her division as well as the Governor’s cup for the first boat to arrive in Juneau. We have the original charts and course plots used by Seidelhuber for this race.

In June 1933 the yacht was sold to Anson Moody of Everett Washington. Little is known of the thirteen years that Moody owned her, other than he changed her name to Wanderer. Moody said that he found the name Mary-Mar-Ann “objectionable” and that the new name would be “very appropriate” due to his intent to cruise the waters of Puget Sound and British Columbia. Moody was reputed to be involved in sawmilling in Everett, but we have been unable to track down further information about him or his boating activities.

In September 1944 Moody sold Wanderer to Thomas F. Gleed, President of Seattle First National Bank. Gleed kept the boat, at least part of the time at his home on Lake Washington. Gleed appears to have cruised extensively in San Juan Islands of Washington and the Gulf Islands of British Columbia. We have a leather bound chart book for these two areas that was made for Gleed, complete with course headings.  Gleed was apparently a man of taste and discernment as evidenced by his personal whiskey bottled for him in Kentucky.Gleed’s son in law Gordon Boone who regularly used Wanderer,may have been in a mishap in Genoa Bay, B.C. that led to Wanderer entering into Canadian Registry.

Bentzen, now resident in Friday Harbor, WA, tells the story of towing Wanderer from Genoa Bay to Maple Bay for repairs at the Marina he was part owner of.  This led to his contact with Gleed and his eventual purchase of Wanderer.

John Bentzen owned Euphemia from 1964 to 1966. He and his three brothers were involved in a number of maritime ventures in Maple Bay, Silva Bay, Vancouver and Friday Harbour.  In a letter of June 12, 2006John Bentzen sets out his recollection of the history of Wanderer.

The next owner was E.L. (Binks) Rainsford who purchased her from Bentzen in 1966.  Rainsford had a survey done in 1972 which indicates that he replaced the engine with a 1967 Volvo diesel.  This comports with Bentzen’s comment in his 2006 letter that the boat needed new power which he could not afford.

The survey is also the first official document that shows the name change to Euphemia II. Members of the Rainsford family tell various stories about the name change, but all of them have in common the fact that the yacht Cora May had just registered a name change to Wanderer and Rainsford wanted a unique name.

One story has it that Mrs. Rainsford who was of Scottish heritage was pregnant at the time.  It was tradition in her family that the first daughter was always to be named Euphemia, a revered Scots name.  Mrs. Rainsford did not want her daughter to carry such an archaic name; hence Binks was to use the name for the boat, thus satisfying the tradition.  The name has stuck and both subsequent owners have delighted in it.

On March15, 1973 Dr. Floyd Stanley and his wife Christine acquired Euphemia. On December 24 of that year, Euphemia sunk at her moorings in Cowichan Bay.  An improperly installed bilge pump outlet was forced underwater by a log caught between the boat and the wharf.  The sinking was listed as “partial” and extensive recovery and restoration work was undertaken by the Bentzen Brothers at Maple Bay.

​Eventually, all was restored to good order and the Stanley’s cruised extensively up and down the West Coast of British Columbia.  Floyd was a master mariner who loved to explore difficult passages and remote encampments.  He never hesitated to tie up to a log boom, carrying multiple “log dogs” for just that purpose. Floyd was always the first to lead the way through the rapids, explore a deserted village or wander up a long inlet.

In 1978, Peggy and Mike O’Brien with daughter Jodi were anchored in Laura Cove in Desolation Sound sitting on the back deck of our little thirty foot 1930 Nomad I when we saw this glorious white Yacht with Teak cabins round the point and drop anchor.  We exclaimed in unison “That’s the boat I want!” We cruised with Floyd and Chris until the mid 90’s when they moved north to “homestead.” Eventually Floyd and Chris returned to the Maple Bay area and much reduced cruising.

When Dr. Stanley passed away in 1998, the O’Briens acquired Euphemia.

With the help of Classic Yacht Association friends in Seattle, the O’Briens were able to track down the US history shown above and also the correct name of the builder.

She was originally registered in Canada as being built by “Kolstrand”, but it was discovered that Kolstrand was the builder of Euphemia’s helm with a nice little brass identity tag on the wheel.The O’Briens cruised Euphemia extensively from Seattle to the Broughton Archipelago, participated in many classic boat shows and entertained royally on board.

Mike O’Brien, a graduate of the Silva Bay Shipyard School of wooden boat building, did much of Euphemia’s maintenance, but where major structural upgrades were necessary, Phil Pidcock at Cove Yachts, Maple Bay and Rob Abernethy and Jean Gaudin at AG Boats, Brentwood Bay provided the skills and expertise to keep her in cruising condition.

The O’Briens sold Euphemia in September 2021 to Peter Harvey.