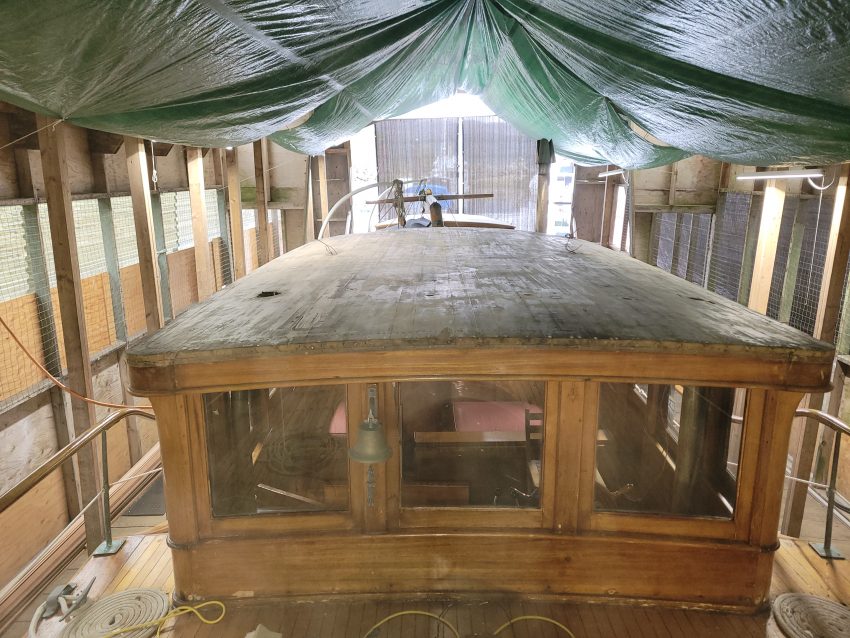 I attempted to clean up one piece of the removed hand rail. This is mostly about removing the metal/lead bead – but this failed straight away. I thought I would just clamp a vise grip on one end and starting twisting/rolling it off. Instead; I just broke off a chunk. I fiddled with it for about 10 more minutes and then realized that I can defer this indefinitely – this was not in the critical path at all.

I do need to be prepared to reinstall the half round I removed. I had broken one of the corners badly and the others were a bit roughed by the process of removing them. I thought of making a corner to replace the broken one and then thought of how it may look out of place being fresh. So I am going to source new half round (probably in fir) and get some fir stock so I can make 4 new corners. In this way it will not looked patched – but in fact – all look clean.

I removed some lingering tacks and nails and then sanded the roof to ensure that there are no pointy bits or even rough edges. It became clear that there are some soft spots along the aft edge and that these were going to pose a problem in fastening the new canvas. So not only did I pick up some epoxy but also a strip of fiber – the fiber for the aft edge. Also; some cold cure epoxy – so I can use it now (probably tomorrow).

The powered stapler arrived (with stainless 10mm staples). Some of the brass mini-nails/tacks arrived but they are too small – I will use some stainless mini-nails I picked up locally.